The fifth winner of the annual New Criterion Poetry Prize is Geoffrey Brock’s Weighing Light. From the glinting scales in a painting by Vermeer to the white lines that disappear beneath a headlight’s beam, Mr. Brock’s poems measure out the often elusive weights and distances of the known world, confronting the unruly powers that threaten his burnished surfaces. His acute observations of landscape and of the smallest gestures that pass between people give rise to affecting human dramas both stark and deeply felt. Once read, his keen perceptions—all the more striking for the expertly cadenced music of his language and his supple use of poetic form—will be long remembered.

“Geoffrey Brock’s poems are delightful in ways which are all too rare nowadays. I am grateful for their freshness of attack, the play and interplay of their words, and their speaking voice, which talks so often in the key of rueful comedy… In such a poem as ‘Ovid Old,’ I find an admirable technique, a keen eye, and what used to be called ‘a knowledge of the human heart.’ In many another poem he shows that he is among the finest poets of his generation.” —Richard Wilbur

“Brock’s understated fluency in investing ordinary moments with ‘alchemic light’ makes comparison to Larkin inevitable… Like Larkin, Brock actually has a sense of humour… Humour is dangerous for a poet because many people see it as a lack of seriousness… [But] Brock is a most serious poet and one whose career, on the basis of Weighing Light, must now be followed with close attention.” —David C. Ward, PN Review

“A superb book.” —The Literary Review

“I admire Weighing Light intensely. Irony without bitterness, observations of startling freshness and exactitude, the homeliness of life caught in the quick, a cool heat, a chaste and tightly wrought architecture of sound: Geoffrey Brock has compressed all these virtues into his poems. They may weigh light, but they strike hard.” —Rosanna Warren

“Brock is out to grapple with the mess, not to say wreckage, of human relationships… Weighing Light is a book of clear premises, profitably stuck to and…departed from.” —D.H. Tracy, Poetry

“[Brock] write[s] in traditional English metrics with a naturalness and ease, an unshowy virtuosity… [A] haunting, original, and intellectual voice… Figurative clarity leads to troubling ambiguity, and the invitation to think is one we can’t help but accept. Such is Brock’s considerable skill. His voice, woven in the mesh of his verse, has an Old World authority.” —Mark Jarman, The Hudson Review 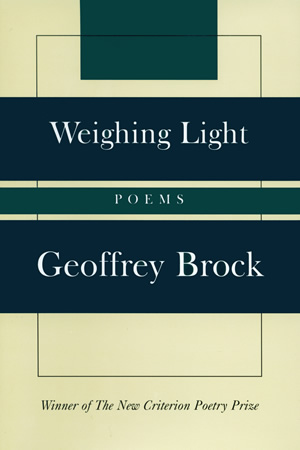