From the internationally acclaimed author of The Marriage of Cadmus and Harmony comes one of the most significant books in recent years on a writer of perennial interest—a virtuoso interpretation of the work of Franz Kafka. What are Kafka’s fictions about? Are they dreams? Allegories? Symbols? Countless answers have been offered, but the essential mystery remains intact. Setting out on his own exploration, Roberto Calasso enters the flow, the tortuous movement, the physiology of Kafka’s work to discover why K. and Josef K.—the protagonists of The Castle and The Trial—are so radically different from any other character in the history of the novel, and to determine who, in the end, is K. The culmination of Calasso’s lifelong fascination with Kafka’s work, K. is also an unprecedented consideration of the mystery of Kafka himself.

Go to the Penguin Random House site (US))

“For such a writer [as Kafka], Calasso is the ideal critic. Under his patient gaze, the inner connections of Kafka’s writing emerge.” –The New Yorker

“Calasso’s brash method…is simply to reinscribe, persistently, the essential power of the myths and stories he considers, largely by the act of retelling them in his philosophically muscular prose, superbly translated here by Geoffrey Brock.” —Jonathan Lethem, The New York Times Book Review

“Most people who love Kafka are less interested in the quarrels of the literature departments than in immediate encounters with the life of his disorienting texts. This is one reason why advance notice of Calasso’s K.—elegantly translated from the 2002 Italian edition by Geoffrey Brock—has aroused much interest and hope… No one could bring more intelligence and cultural range to a fresh encounter with Kafka… Calasso always repays close study, his prose is a marvel, and K. makes for an exhilarating adventure.” —Frederick Crews, New York Review of Books

“Like Joseph Brodsky’s essay on W.H. Auden’s ‘September 1, 1939,’ Calasso’s study of Kafka is one of those all too rare performances that give literary criticism a reason to exist.” —The Weekly Standard

“Calasso’s new study of Kafka, very fluently translated into American English by Geoffrey Brock, [presents] a series of finely expressed, thoughtful—one is on the verge of saying old-fashioned—readings of Kafka’s work…. For the most part what strikes one most about these companionable readings is their justice and tact.” —The Independent (UK)

“[A] refreshingly unconventional study that…yields astute, nuanced, even revelatory observations that humanize Kafka and, in particular, illuminate the ineffable powers that hold sway over the lives of his two K-protagonists, Josef K. of The Trial, and K. of The Castle. This masterpiece of essayist prose is destined to take its place in the pantheon of Kafka studies.” —Choice

“[An] extraordinarily rich study… Calasso’s remarkable book, which attempts to illuminate Kafka’s fiction by its ‘own light,’ is a reminder that criticism doesn’t have to be strenuously analytical. Sometimes it succeeds by creatively redescribing what it criticises.” —Financial Times (UK)

“Calasso’s study is a milestone not just in the ever burgeoning literature about Kafka, but in literature itself… Kafka has had marvelous interpreters in the past, including Walter Benjamin, Canetti and Maurice Blanchot. Without exaggeration, Calasso belongs in this elevated company.” —Publishers Weekly (starred review)

“Calasso meshes at a seemingly cellular level with Kafka’s language, images, and stories as he extracts and identifies the motifs and perspectives that have made Kafka such a towering presence in our collective imagination… By harmonizing so empathically with his subject, Calasso rekindles appreciation for the unique and indelible power of Kafka’s work as well as its rueful beauty.” —Booklist

“It is perhaps ironic that one of the few critical minds to wrestle Kafka’s work away from the oppressive grip of mythical reduction is an intellectual famous for recognizing the role of myth in literature and history…. K. is a revolutionary entry into Kafka scholarship and should provide those searching for a fresh appraisal of Kafka’s singular universe reason to rejoice.” —The Globe and Mail (Canada)

“Drawing on Kafka’s diary entries and performing dazzling close readings of The Castle, The Trial, and selected short stories, Calasso traces Kafka’s literary lineage from Dickens to Dostoevsky and reveals the many layers of meaning that make up the enigmatic writer’s universe.” —Library Journal

“We were looking forward to a reader of Kafka for the 21st century, the century of fragmentation. And who could be better than Roberto Calasso for this task?” —Alberto Manguel, El País (Spain)

“Calasso’s creative energy is active throughout. He claims to present Kafka’s work as ‘illuminated by its own light’ and succeeds in a unique way.” —Muriel Spark, The Times Literary Supplement (UK)

“Calasso’s interpretation of Kafka is intellectual rather than academic, with nary an ’h’ word (hermeneutic, hegemonic, heuristic) to be found, but the book is also a narrative. Calasso’s technique … is philosophy made dramatic, which is sort of what Kafka did. Calasso’s relentlessly inquisitive mind is the perfect counterpart to the mind he investigates.” —The Los Angeles Times 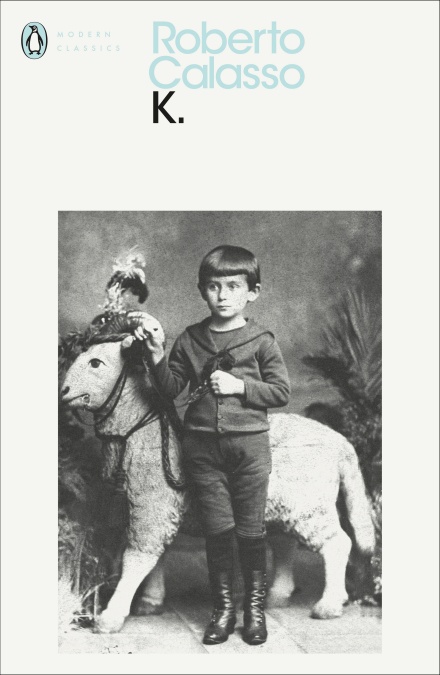