A beautiful, wrenching debut chronicling the life of a family struggling for survival during the Armenian genocide in Turkey, in 1915. After forty years in Venice, Yerwant is planning a long-awaited reunion with his family at their homestead in the Anatolian hills of Turkey. But as joyful preparations begin, Italy enters the Great War and closes its borders. At the same time, in Turkey, the Young Turks, determined to rid their nation of minorities, force his family on a brutal march of hunger and humiliation. We follow Yerwant’s relatives as they strain to stay alive and as four children set out on a daring course to reach Yerwant—and safety—in Italy. A novel as lyrical and poignant as a fable.

“Genocide figured in both world wars, but whereas the Holocaust is massively attested, the deliberate extermination of Armenians in 1915 is far less so. Retired professor Arslan’s first novel, based upon the experiences and using the names of her family, conjures that terrible time with consummate art… Squirmingly suspenseful throughout, this soul-shaking novel feels like a masterpiece.” —Booklist (starred)

“A powerful account… Translated from Italian with impressive subtlety by Geoffrey Brock.” —Bloomberg

“Antonia Arslan’s masterly debut novel begins in Turkey, 1915, on the cusp of the Armenian genocide. A horrific ending looms, yet this does not make Skylark Farm any less gripping… [I]mmense warmth and unforgettable characters.” —Financial Times

“Those who read Skylark Farm will never forget the events of 1914–1918… The strength of the tale is striking: By page 23 readers know what the outcome will be and yet it’s impossible to stop reading. Skylark Farm operates like Schindler’s List; it’s a story of hope that makes it easier for us to confront the horror of what happens when evil is allowed to run unchecked.” —The Christian Science Monitor

“In Arslan’s hands, the gruesome details of this tragedy are palliated by an old-fashioned story of redemption… Skylark Farm is an affecting book, and sensitively translated by Geoffrey Brock.” —The New York Times Book Review

“This intense, complex account [is] a book to savour.” —The Guardian

“Epic in sweep and heartbreaking in tone, Skylark Farm is billed as a novel transformed from the ‘obscure memories’ that are Arslan’s heritage. It reads rather as a dramatised family memoir, one that remains in its essentials a factual evocation of the bestiality, endurance and occasional heroism that attended the liquidation of Anatolian Armenia.” —Sunday Telegraph

“[A] luminous debut… Heartbreaking and highly recommended.”—Historical Novels Review (an Editor’s Choice for May 2008)

“Arslan’s resurrection of the 1915 Armenian genocide in her debut novel, Skylark Farm, is pertinent and provocative… Precise, vibrant description and sumptuous language animate every facet of this world touched by death and terror.” —Chicago Tribune 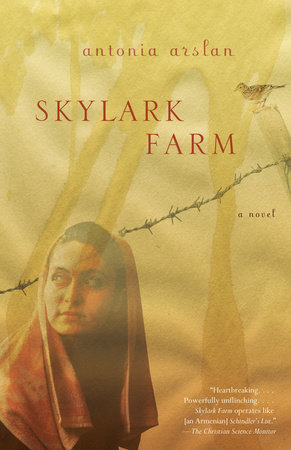