All neighbors of the flesh
—form, fields of wheat, emptiness—
are gathered in its immediacy.

In this volume, we see the power of human transformation—the urge to create something new of ourselves, the courage to interrupt the flow of routine for something we believe in, whether through a hunger strike in a Korean factory or by standing still amidst the chaos of occupied Czechoslovakia. We see the power of hidden agendas at work in Italian and Argentine letters—and how these currents can sometimes be as obvious as the electricity that surrounds us in our everyday lives. We see power imploding in a Chinese poem of rage and witness Russian love poems borne of powerful desire, despite dire circumstances. As always, we see translators standing on their predecessors’ shoulders to examine the expanse of great poems ripe for retranslation, poems like the ancient Greek text published in its remaining fragments here. We see the interaction between translator and author at its most imaginative, with the power even to reshape a piece in its original language. And we see that the power of belief survives—whether carved five thousand years ago on a clay tablet, published in the underground press fifty years ago, or written about just this year—resilient in its travels from one language to the next.

Finally, of course, language itself is power. Consider the impact and potential finality of simple phrases like “I do,” “I solemnly swear,” or “Charge!” Words can set events irrevocably in motion: “Lights! Camera! Action!”; “Ready! Set! Go!”; “Ready, Aim, Fire!” The film is rolling, the racers have left their marks, bullets are flying, regardless of what is said next. Think of the mighty whose words have proven their undoing: “I am not a crook.” “Read my lips: no new taxes.” “I never had sex with that woman.” We are never more aware of the power of words than when we are deprived of them. In a nation that theoretically values the freedom of expression, many voices are still censored, even silenced. Some are accused of giving solace to the enemy because they speak against the political establishment; others are accused of collaborating with criminals simply for translating their words. Unbelievably, even editors and publishers may now face serious legal consequences for working on manuscripts from Iran and other disfavored nations, on the grounds that any alterations to such texts amount to trading with the enemy.

The English politician Lord Hallifax once said, “Power is so apt to be insolent and Liberty to be saucy, that they are very seldom upon good terms.“ In the face of such an abundance of muscle-flexing, we decided to pay tribute to this year’s TWO LINES theme with a power-sharing arrangement of our own: we invited two guest editors to take the helm while I wrestled with the awesome powers of a newborn baby. Marian Schwartz, renowned Russian translator and former president of the American Literary Translators’ Association took charge of the prose; Geoffrey Brock, Stegner Fellow in poetry at Stanford and award-winning Italian translator, handled the poetry. Unilateral force can be a lonely way to go, and we were delighted to establish this balance of power. 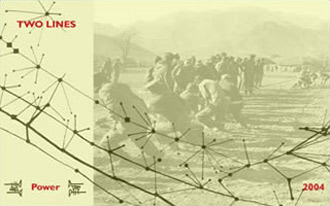