Voices Bright Flags is a series of experiments in what is sometimes called public poetry, with the poet’s country, America, and his relation to it, as the main theme. The poems approach America from a range of perspectives—political, historical, and personal—and in a range of styles and voices, with each voice planting its own flag, as it were, implying its own America. Together the poems form a partial (in both senses) mosaic, a discordant chorus, a succession of conversations and quarrels between the poet and the motley citizens of his imagination.

See the book at the Waywiser Press site

“The collection Voices Bright Flags could have been created only by a lover of texts—an avid consumer of histories, biographies, diaries, essays, articles, ledgers, novels and ephemera. It is a book of and for the old-fashioned reader, the one who will appreciate the precise prosodic dados and dove-tailings of the poet’s craft.” —from Heather McHugh’s foreword

“[W]hile distinguishing himself as one of the pre-eminent translators of Italian poetry in this country, Brock showed himself with his first book, Weighing Light, also to be one of the most gifted of the younger formalists. His gift is on full display in the new book. Many of the poems in Voices Bright Flags take figures and events from American history as their subjects. It is a curious thing about old fashioned poetic form that not only is it best for humorous verse … but it accommodates historical subjects well and both reveals their symmetries and hints at their chaotic origins… In the book’s first poem, ‘Bryant Park at Dusk,’ Brock suggests that the act of reading will be his subject. He describes watching a woman reading on a park bench as the evening comes on. He sees how she looks away from her reading, then returns, still in a kind of revery. It is perhaps this revery of attention that his series of historical poems asks of us: a return to subjects we think we know already. The subjects of the poems range from Phillis Wheatley in England to the battle of Cold Harbor to the Westward Expansion to Anzio in World War II to the ivory-billed woodpecker and the passenger pigeon. Brock is such a good writer that you never wonder if he can sustain the poem.” —Mark Jarman, Hudson Review

“Geoffrey Brock’s Voices Bright Flags is ambitious in the best sense of the term. The breadth of his subjects—from the first Western contact with the Hawaiian Islands, to ornithology, the buffalo nickel, and his young son’s nightmares—makes the unity of vision behind the book all the more striking. There is insight here without self-consciousness, bold craft without showiness. Voices Bright Flags is a rich, important, and deeply humane collection.” —Don Bogen

“Geoffrey Brock’s Voices Bright Flags is rooted in political emotions, not political opinions. It combines exquisite technical sophistication with plainspoken language attuned to the particulars of time and place, a combination put in service to a rich and troubled vision of America as both stubborn dream and dream-killing reality. If you’re looking for poetry that is immersed in literary and social history while avoiding all the usual pieties and commonplaces about American culture in favor of keenly evoked and deeply felt experience, personal and collective, this book is for you.” —Alan Shapiro 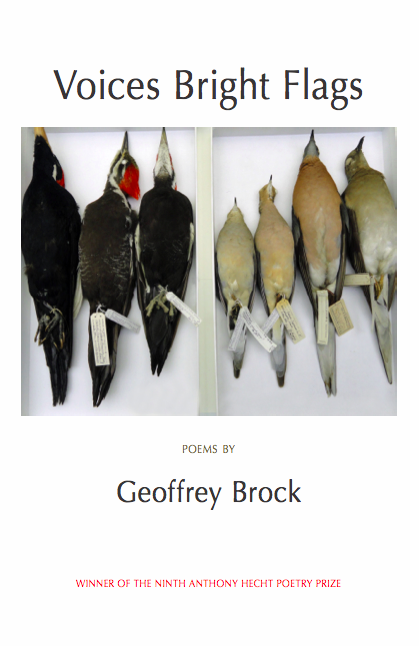