Cesare Pavese (1908-50) was one of Italy’s great post-war writers. His poetry was revolutionary—both artistically and politically—rejecting the verbal and philosophical constraints of tradition and utilizing direct, colloquial language. His subjects were peasants, hobos, and prostitutes, and this bilingual volume includes all the poetry Pavese ever published, including work originally deleted by Fascist censors. A landmark volume.

Pavese was a novelist, poet, and translator and a major literary figure in post-war Italy. He brought American influence to Italian literature through his translations. Pavese’s flight from the Fascists and subsequent confinement were reflected in his writings, which dealt with social struggle and revealed his sympathy for the oppressed. He committed suicide at the height of his literary powers.

“Superb translations of a major poet. Brock does the impossible: he keeps the letter and spirit of the originals and creates poems in an American voice.” —Philip Levine

“Brock’s translation is idiomatic, rhythmical, and utterly gorgeous. The poems actually seem to rise from the page, since this translator knows how to convey Pavese’s plain-speech eloquence and his painterly crispness. It helps to have a real poet as a translator.” —Peter Campion

“These are the best Paveses ever.” —Michael Schmidt (author of Lives of the Poets)

“Brock’s translation is the first of the complete poems of Pavese, and is by far superior and more accurate than the select translations that were published in 1969 and 1976.” —Quadrant (Australia)

“Brock’s ‘hard labor’ in translating Pavese’s poetry has paid off in true poems in English: poems that have the density, the grit, the obdurate presentness hewn from silence for which Pavese fought so hard in Italian. Pavese’s poems remain vitally original in Italian a half century after their first appearance; in Brock’s English, they have the startling power of poems that will always be new.” —Rosanna Warren

“This translation is a rare convergence of ambition and skill. Pavese’s weird, hard grace suffuses these impressive renderings.” —Henry Taylor

“One of the marks of a good translation is the ability of the translator to create a ‘silence’ where the author’s voice can be heard. One listens, rather than reads. And it is this silence that allows the reader-turned-listener to hear the assimilation, the incorporation, the metabolization of Pavese’s world in Brock’s translations.” —Judges’ Citation, MLA’s Lois Roth Translation Award

“Until now, Pavese’s poetry hasn’t been available in an English translation that carries both the colloquialness of his language and the haunting rhythms of his verse. Geoffrey Brock’s fine new translation has met this need…. The cadences [are] beautifully rendered… It is a rhythm that…puts a spell on the listener, running like a bass line through the poems.” —Andrew Frisardi, Los Angeles Times

“An exemplary volume. As a poet-translator, Brock has brought Pavese’s poems to English without a loss of defining rhythm and meaning, and with an attention that indicates the translator’s profound understanding of another writer’s poetics.” —Judges’ Citation, PEN Center USA’s Translation Prize

“Brock’s highly crafted translation much improves on William Arrowsmith’s version… [and] bristles with intelligent decisions. Even the hesitating quibbler (who notices a singular ‘street’ in the English for an Italian plural, and a few other minor departures from the original) perceives how much attention Brock has paid to the way that Italians and English-language readers respectively form mental pictures with words. He often brilliantly translates at this conceptual level.” —John Taylor, The Yale Review

“Brock has captured Pavese’s unique timbre of sound, clarity of vision, the flesh of the poetic life… Brock’s versions do nothing to blunt Pavese’s powerful vision.” —Virginia Quarterly Review

“Brock manages to capture the rustic grit of these speakers, while also conveying the measured restraint of the original Italian. Even when the poems downshift into understatement they maintain a mysterious apocalyptic tension, a poised balance between the metaphysical and the real that is the hallmark of Pavese’s mythic power…. Brock is scrupulously faithful to the Italian, consistently expressing in English the authentic sense and spirit of Pavese’s poems. As a result, we have been given access to a body of startlingly original poetic work.” —Rita Signorelli-Pappas, The Literary Review

“[Brock’s Pavese] is the best, and the most ample, in English to date.” —Jamie McKendrick, The Guardian (UK)

“Brock, an award-winning American translator and poet, has [done] justice to the syntactical and lexical texture of Pavese’s verse as well as to its existential and lyrical intensity. Previous translators had failed to do so.” —The Irish Times (Ireland)

“[Pavese’s] reverse-waltz rhythm carries forward the narrative elements of the poem with energy and elegance and Brock has caught that rhythm well in his translation.” —Lawrence G. Smith, Cesare Pavese and America

“With this new rendering of Pavese’s poems into English, Geoffrey Brock has finally done justice to Pavese’s work, which has previously suffered from being poorly translated… For both new readers and for those already familiar with Pavese, it is difficult to recommend Disaffections too highly.” —Ian Seed

“Brock’s translations are generally good at bringing the rhythm and narrative impetus of Pavese’s verse into English: you find yourself drawn into his versions, compelled to read them through.” —Matthew Reynolds, The London Review of Books (UK)

“Brock’s translation captures well the springiness and tempo of Pavese’s lines and conveys the original’s sensitivity for nuance… Brock, especially in his deployment of caesura and enjambment, succeeds in capturing some of the original play of sound.” —Harvard Review 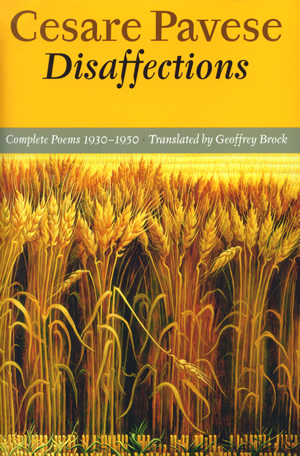